Advisement:  Confidentiality is the cornerstone of the attorney-client relationship.  Please review this page with the understanding that, where appropriate to do so, information regarding the prior representations of the Law Offices of Dennis D. Burns has been kept confidential, while matters such as case names published by official court reporting agencies cited, which are of public record, have been quoted herein. 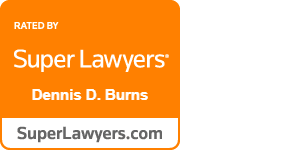 Married Couple of advanced age with an estate in the mid-eight figures decides to not provide for their only son due his personally accumulated vast wealth and instead give to charity, grandchildren, nieces and nephews.  The couple did not wish to insult their son or make him feel that they did not care for him.     Solution: Estate planning that provided for the son’s management of the their estate after their deaths, charging him with carrying out their specific provisions for the chosen beneficiaries and with provisions that fully explained their reasons for his exclusion and their deep affection for him.

Eighty-two year old Widow with vast real estate holdings is befriended by 28 year old man.  Ten years later she changes her Estate Plan of 27 years and provided for a $1.8 million gift to the young man and provided further that her two children must pay the $900,000 tax chargeable to that gift from their own inheritance.     Solution: Post death litigation revealed widespread financial abuse of the elderly Widow by the young man resulting in return of the $1.8 million asset to the Estate of the Widow after her death.  All attorney’s fees necessary to obtain this result were later approved by the IRS as deductible from taxes imposed on the Estate.

Eighty year old Widow with $4 million estate is shielded,  due to estate planning done prior to her husband’s demise. Large auto accident personal injury claim against the Widow was not covered by insurance which would have reduced her estate to  less than $200,000. Widow would have been deprived of her support, independence and her family from their inheritance.    Solution: By having previously administered the estate of the pre-deceased husband with an eye toward preserving the deceased husband’s portion of the estate for their children, the Widow was able to maintain her assets and life style and preserve her children’s inheritance.

Trustee/Beneficiary disputes are the most common portion of our practice.  Over the last 40 years our firm has represented dozens of trustees and beneficiaries in enforcing the rules governing trust estates in order to preserve the intent of the decedent.

Case History: An elderly family friend leaves a large estate to brother and sister.  Brother is appointed trustee and pillages estate. Brother does not provide accountings and fails to timely distribute estate.  Our petition to remove the trustee allows us to obtain a Court’s order to force the filing of accountings leads to a settlement whereby the Trustee is denied all fees, legal costs and pays sister a surcharge for his activities of several hundred thousand dollars.

Non-Marital Estate Planning and Administration (Avoiding the Need for a Marvin Action):

It is not uncommon in this day and age for couples, whether they are elders or not, to forgo a marital relationship and co-habitate with their significant other. This can lead to some extreme legal complications and sometimes even litigation, before or after the death, of one of the partners.  “Palimony” or what in legal parlance is often referred to as a “Marvin Action” is becoming more commonly utilized to resolve differences in such circumstances.  Properly planned estates and certain legal precautions can limit or avoid entirely the possibility of such legal issues arising.  A short confidential visit to an attorney familiar with these circumstances could have avoided these costs and emotional impact on the surviving spouse.

Case History:  Widow successfully defends estate of a Marvin claimant by asserting “Sterling Defenses” as the community property holder of real and personal property allegedly promised to a third party associate of deceased husband.  Claim in excess of seven figures avoided after aggressive litigation.  All property retained by the estate for benefit of widow and her family.

Case History:  “Reverse Marvin” theory used to enforce oral contract between young non-married couple for failure by girl friend to honor commitments made in exchange for title to real property being recorded in their joint names.  Partition action filed by girl friend resulted in cross-complaint for breach of contract and credits applied for failure to contribute to costs of purchase of their joint residence.

Case History:  Married professionals with large separate asset estates filed quiet title action against each other to conclusively establish rights of husband as to separate property assets of wife due to large legal claim against husbands assets. By so doing rights as to the separate property residence of spouse, as not being subject to claims by husband’s creditor, could be established.

Federal Ninth Circuit Appellate opinion reverses $1 million plus judgment against doctor client due to acts of extreme and outrageous conduct by his  prior counsel that led to the judgment being entered.   The Supreme Court of the United States had just months prior in a decision on the same issue ruled to exclude this type of relief.  It was argued by Dennis that the activity of prior counsel bordered on, or was, actually criminal in nature and should relieve the client from the prior Supreme Court opinion to the contrary.  The three judge Ninth Circuit District Court Appellate panel agreed and the judgment was reversed.  The opinion has been cited law in the official Federal Ninth Circuit Reports, was reported on by the Los Angeles Law Journal and cited in law school textbooks nationwide. The published opinion is the sole authority in contravention of the Supreme Court’s prior ruling on this subject. SmileCare vs. Tani.

Client whom had a default judgment against him for over $1 million is successfully allowed to disclaim his one-half interest in his mother’s multi-million dollar estate. The estate, as a result, was allowed to be solely inherited by his brother and protected from the client’s personal creditors.  Creditor objected to the disclaimer rights of client to his mother’s estate. The ensuing probate court litigation brought by the creditor ultimately determined that the creditor of the client had no rights to the mother’s estate assets.

Estranged children of decedent file lawsuit to avoid distribution to second wife of 35 years.  Children claim undue influence and incapacity.  Widow defends action and maintains distributions called for by the trust to her and her family.  Case dismissed without payment to estranged children.

Large North County shopping center owned by a limited partnership and a Family Limited Partnership with disputed ownership is subject to forced sale via the summary process of partition action to resolve individual interests.  The client receives a premium for her interest of over eight figures.